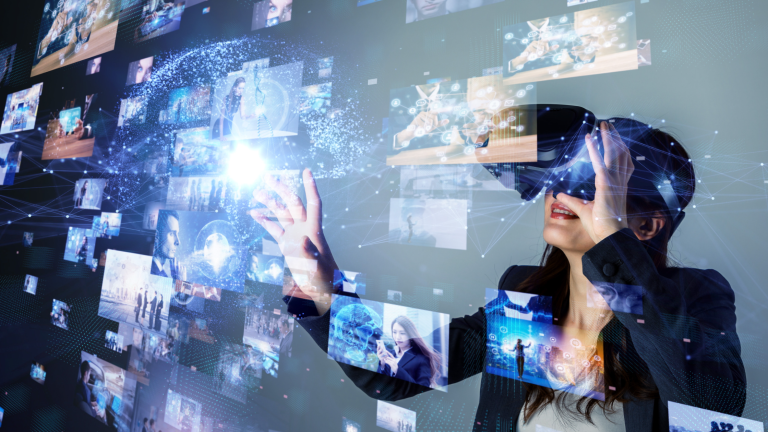 Metaverse this, Metaverse that…unless you’ve been somewhere with no internet activity, chances are you’ve seen articles, blogs, social media posts, and news stories about Facebook’s transformation *ahem*, ascension into Meta. As in, an all-powerful digital world where people can do everything they do in real life, only with Virtual Reality headsets and other fun stuff. It feels like we’re in the early days of Ready Player One.

The last time the world was in a similar uproar was when Google became Alphabet in 2015 and Google became just a product among many within Alphabet’s portfolio. On the surface, it seems that Facebook is following in their footsteps but given all the recent scandals and allegations being levied against Facebook, the timing feels a bit…suspect.

But let’s backtrack for a bit.

To understand more about Facebook’s change to Meta, it’s important to understand what the Metaverse is. The term ‘metaverse’ was first coined in Neal Stephenson’s 1992 cyberpunk novel, Snow Crash. In the book, the Metaverse is a fictionalized concept that is a shared imaginary place that has been made for the whole world that is made available through optic-fibers network (internet) and VR glasses. Since then, the need for development of the metaverse has been on the rise by various companies such as Microsoft, Alphabet, and now, Facebook. The metaverse currently stands for a digital platform or reality that combines aspects of social media, online gaming, augmented reality (AR), virtual reality (VR), and cryptocurrencies to allow users to interact in a completely established virtual world.

Many feel that Facebook’s rebranding to Meta is a way to lay claim over this larger metaverse, i.e. by doing so, it makes it easier for them to lay claim or ‘own’ the metaverse. This could be the final step that turns social media and the wider digital world into a potentially 100% – or close enough – monetized space.

It’s true that we do pay for some things through subscription services but generally speaking, we’ve been able to access a lot of different platforms, services, and products for free simple by going to a website or signing up for an account. Imagine instead if we had to pay from the second we got on the internet for anything from events to meetings to socialization to cryptocurrency and even education.

The Conversation states that Meta could formulize a way to create and easier or alternative way of higher education through VR/AR classrooms or halls. This is entirely possible with the surge in online classes and Zoom lessons because of the ongoing pandemic. Meta will also be able to provide an alternative to traditional in-classroom or ‘face to face’ forms of education. While this may make education easier for most, the drawbacks are high because students will lose vital in-person interactions with their peers and teachers as well as other university-based experiences. In essence, Meta becomes the middleman through its connectivity and makes money off education and those who use its education-based elements.

It seems that this is now a way to mint more money as far as Meta is concerned, given the sheer capital being pumped into this project. This aspect is a cause of grave concern says Roger McNamee, one of Facebook’s earliest investors. He claims that Meta, could lead to a dystopian metaverse – a conclusion reached as he began to see more misinformation on the platform and is convinced that the metaverse would not be safe in the hands of Meta or Mark Zuckerberg’s control. McNamee also states “Facebook should have lost the right to make its own choices. A regulator should be there giving pre-approval for everything they do. The amount of harm they’ve done is incalculable.”

Innovation and connectivity aren’t the only reasons for the creation of the metaverse, it is a very obvious rebranding initiative disguised as something altruistic. Brian Merchant in The Atlantic theorizes that Facebook has now rebranded itself to swing away from all the controversy and battered reputation in recent times, as evidenced by a parade of whistleblowers, damning reports, congressional hearings, and now, the Facebook Papers. All directions point towards this being an elaborate PR strategy along with underlying money-making strategies on the long run.

Meta now joins a historic group called ‘Too Big To Fail’, which means that if it does fall then it will result in an unprecedented chain reaction all across the internet. Many are calling for its dismantling but few in the American government – or potentially any other government where Meta has a foothold – are willing to take the necessary steps to actually ‘fight the beast’.

We predict that in anywhere between the next five to ten years, we’re going to lose the scrappy vibrancy of different social media platforms as Meta gobbles up everything in a bid to become The One True Network.